Sonia Ighalo, the ex-wife of footballer, Odion Ighalo has accused BBNaija Uriel Oputa of sleeping with the former Manchester player.

She took to Instagram drag Uriel while alleging that she had an affair with her husband.

This comes after the reality TV star in an IG post, decried how lots of women stormed her ex-boyfriends DM after she shared a photo of him.

“pls, why do women like other women’s property?? I posted a picture of my Ex who is my good friend. and his DM full .. even those telling me how much they love me done enter his dM saying don’t show Uriel.. biko I’ve seen… I will never post my husband for Instagram biko I don’t have energy for every day Night vigil”, Uriel wrote.

Reacting, Sonia said Uriel is shameless for coming out publicly to accuse women of something she is guilty of.

“This girl don’t have shame oo… How about you fucking married footballer.. you go under his wife comment section commenting and doing frien frien… *Hypocrites are always the first to point accusing finger… Be like it’s time we start calling these yeyebrities out one by one… Aunty pls shut up.. don’t let me expose you. Stop running your mouth on IG. Learn from your Olosho colleagues… After all, nobody DM your ex” 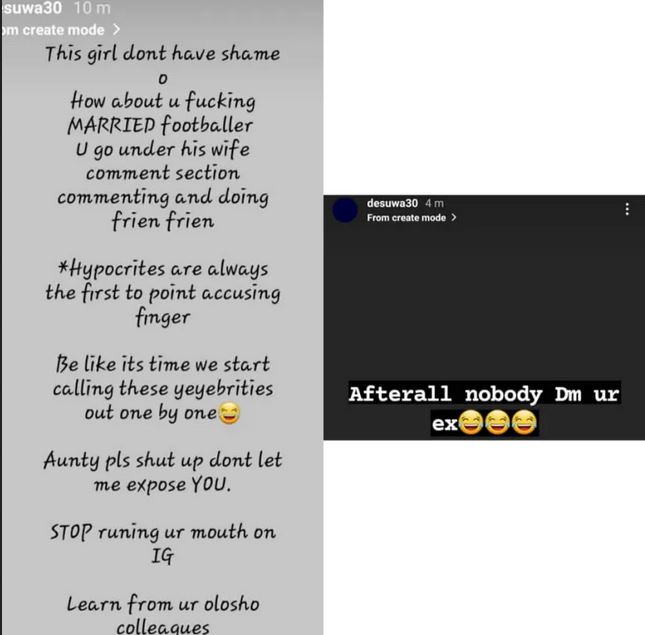